Neighbor Feud… What a strange situation!

A neighbor that I have known for quite a while, and we got along very well, abruptly changed in early September 2020.

During a rainstorm I thought I got a visit from a swat theme, from a profusely hard banging on my door, but it was my neighbor and I thought he must have a medical emergency. After immediately opening my door he promptly shoved a wet piece of paper at me and then quickly left.

I was perplexed and did not know what to make of it, but once the paper of his handwritten note tried and was legible, I discovered it was about a serious crime about my cats committed. Stray cats living outside (unlike his dog), which also get only sparingly fed by caring neighbors to keep them in a hunting mood for rats.

And since stray cats can be here today and gone tomorrow, I did not entertain the idea to have them spayed. And the ridiculous claim about cat booing all over his place shows he has no clue that cats actually bury their own boo, and is the only animal that comes with a self cleaning feature.

Furthermore, I did not even know he had a garden, as the only thing that defines a garden is a fence, and there isn’t one.  And, I have garbage too, but in a container with a lid, to prevent cats and rats from getting to it. I wonder if this is why he calls me a “know it all” and “sneaky” in his second page.

Anyhow, here’s the first page of his water drenched complaint… 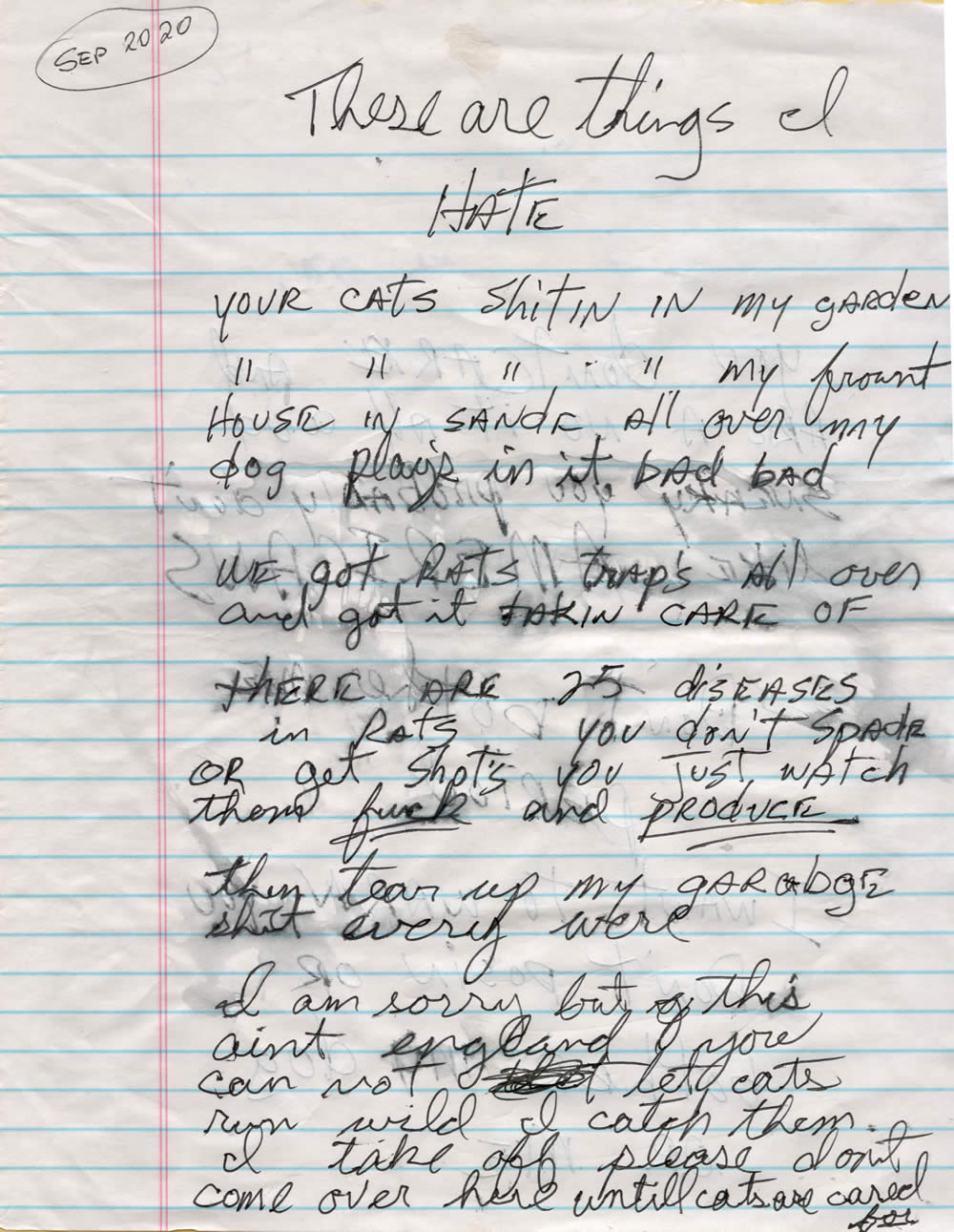 Back of that page… 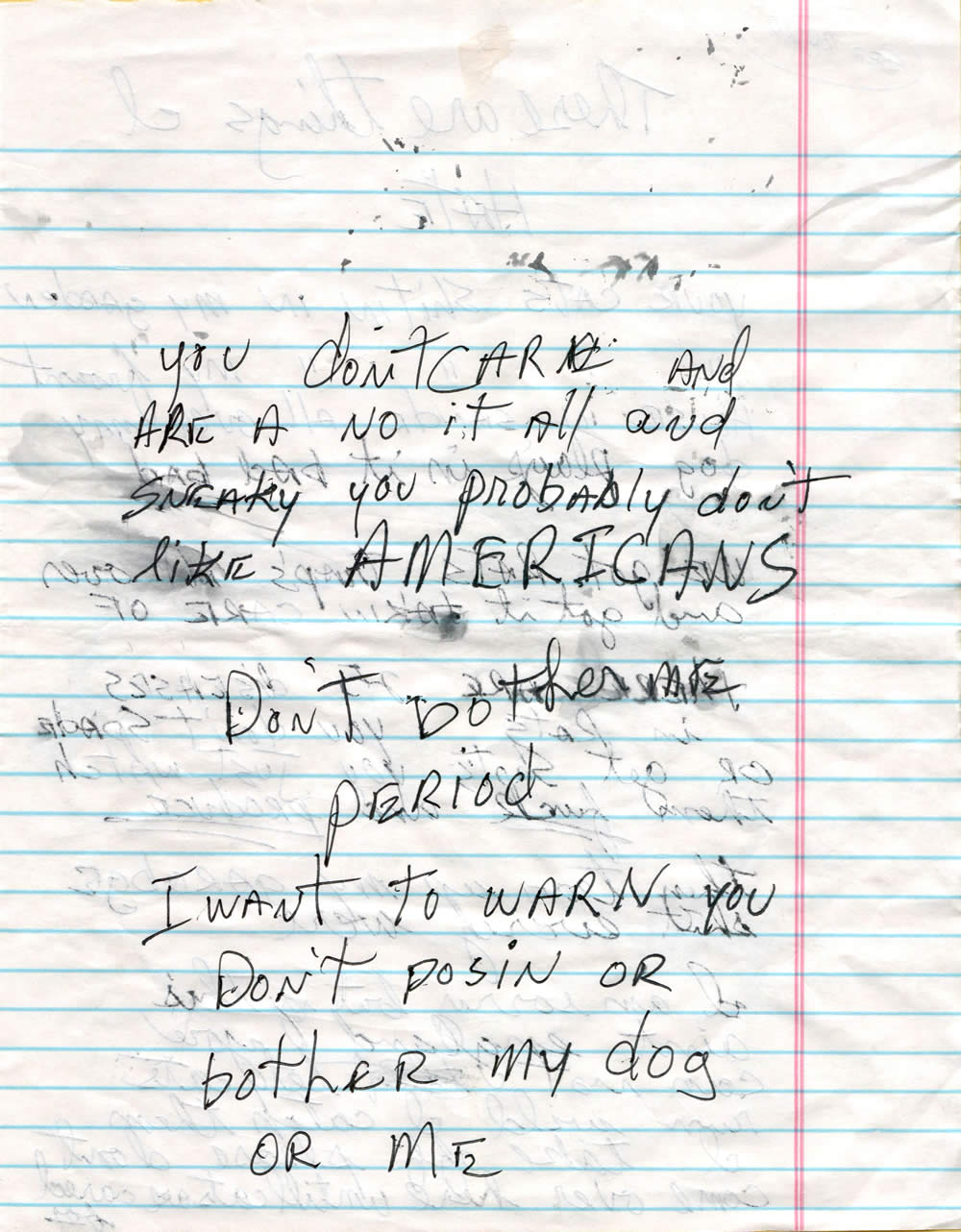 Since he mentioned not visit him before his demands are satisfied, I happily complied. Because, it was apparent that a friendship with a trigger happy emotionally unstable person is more a liability than anything else. So it was peaceful for a while.

However, on January 1, 2021 I certainly got another raging visit from him banging profusely on my door with both fists, yelling and screaming that he found two of his tires low on air, and we need to talk and I need to leave him and his dog alone.

Naturally, already knowing that talking with him in his rage will not solve anything, I no longer opened my door, and let him rage on. The loud banging and screaming from the top of his lungs alerted the landlord next door having his gate open, and I got a call from him what’s going on. After explaining he wanted to call the police, but I recommended to let it slide for a while as I know the offender often smokes some stuff for pain.

The next day on January 2nd (as much as he hates cats), he seemed to have a change of heart, and is now certainly trying to feed the cats. However, none of the 3 cats so far as I can tell are not even getting near his food… 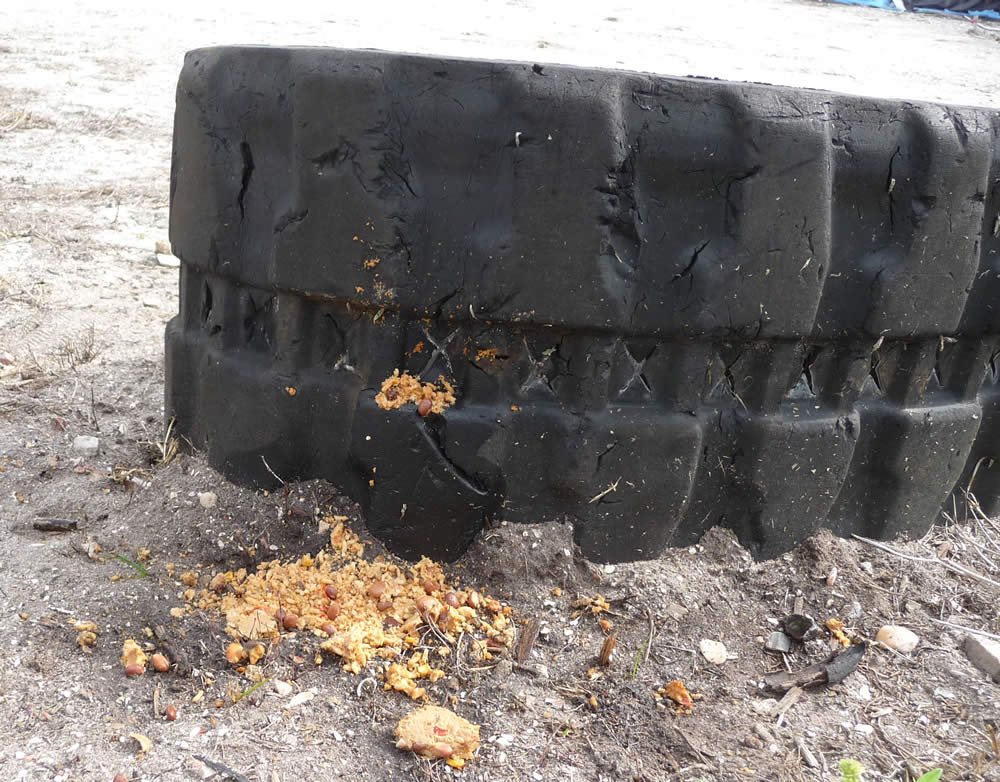 Then on January 3rd, after all the verbal screaming insults and drive-by’s with angry bouts and his famous Up Yours gestures, the mood changed as I am now presented with his peace making board. 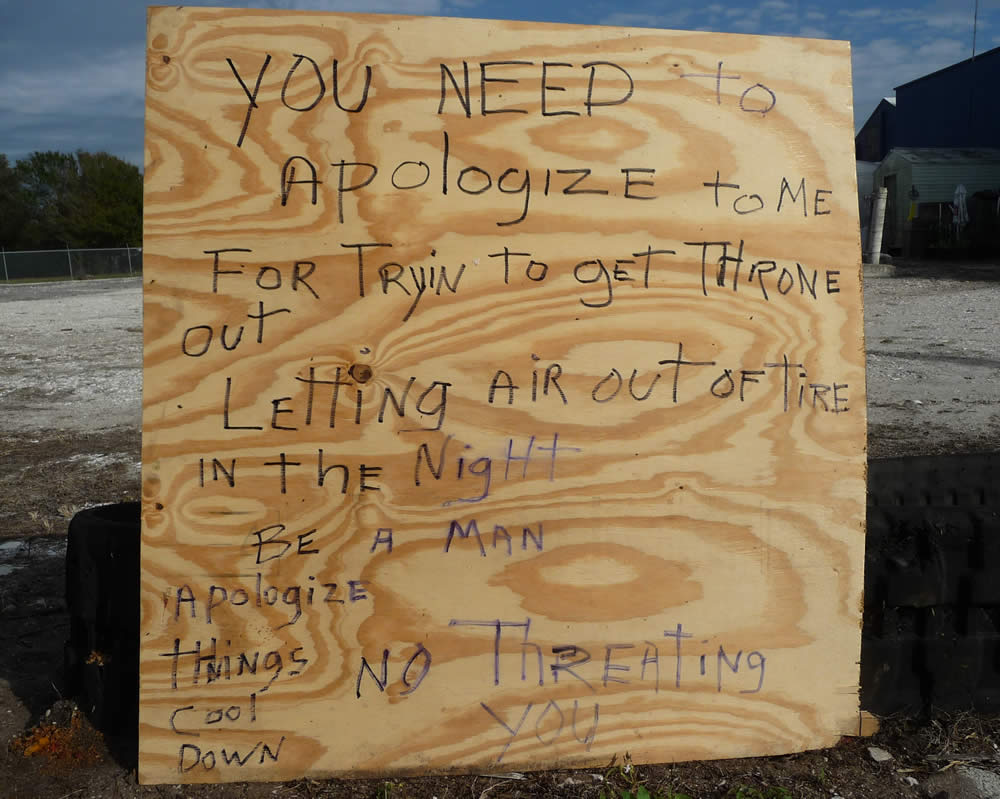 So, after all his wrongful accusation, of letting some air out of 2 of his truck tires, and all his commotion yelling swear word and FU finger gestures, all I now need to do is apologize for something I did not do, and we can be friends again I was told.

Now, I honestly would have no skin of my nose, or hurt feeling, just to get this over with, and apologize for something I have not done, or started. However, in reality I would embolden a wrongdoer to take his sinister accusations even further, and expand this tactic to others as well.

Furthermore, I would even incriminate myself by agreeing with something I did not do, and turn his defamation of character against me. As such, his objective is not going to wash with me, and even though I never had to sue anyone ever before, I’ll have to do him the favor of an apology via the current legal system.

After all, there’s a “Defamation Per Se and Obvious Harm” provision, which is a type of defamation clause which does not require to prove harm. With this type, one does not have to link the slander or libel to specific harm one suffered. The slanderous or libelous false statement by itself is enough to have a strong case of defamation.

So, in plain English… If he keeps up his threats and unfounded accusations, I’ll have no joyce but take legal action and register a complaint with the police for his aggressive behaviour and threats.

If you like to provide a feedback, have suggestions or questions, please email…
case20210104001@verybad.reviews and it will be forwarded to me. Thank you!